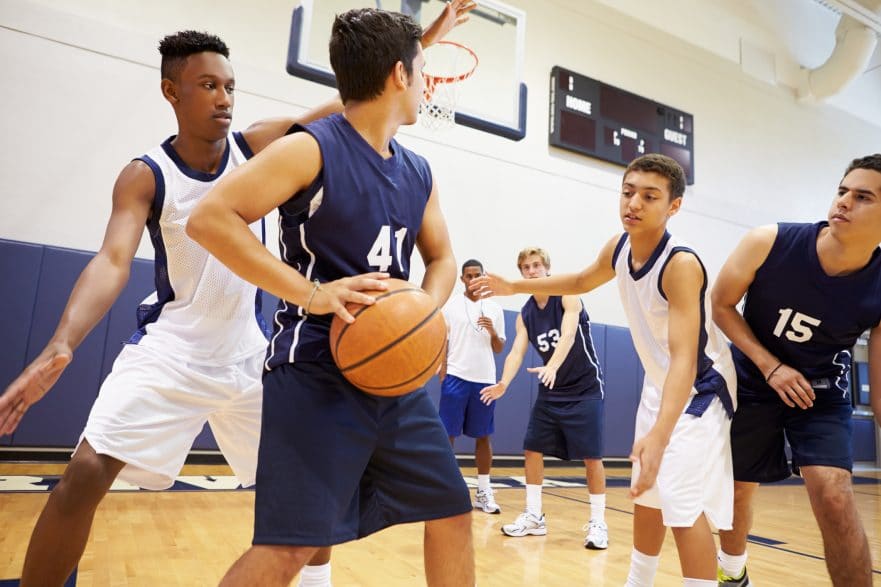 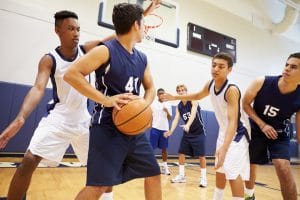 I was sitting on a low wooden bench, looking down at my feet, thinking about what I was going to make my three kids for supper. My thoughts were interspersed by the sporadic thud, thud of 10 or so basketballs hitting the floor as teenage boys and girls set their cadence for their shots at the basket – some clanging off the rim, others bonking off the backboard.

It was our local Steve Nash Basketball League and while my team sports as a youth were hockey, football, and soccer, I did manage to play a little bit of guard in junior high some 42 years ago – which gave me absolutely no ability, or credibility, to render anything resembling good advice to these fun-loving and ardent souls out to enjoy a nice game of basketball on a rainy Sunday afternoon.

But they were short on parent coaches, and since my youngest boy was playing, I felt obligated to volunteer – having stepped back from hockey this year thanks to back issues. (Grrr!!)

And besides, I really liked this particular basketball league, because of the rules and spirit in which it is played. It is played by kids spanning four years (13-17) of age and includes boys and girls, locals & international students, and some kids who have some minor development issues. It’s inclusive, and it speaks to the joy of play and the desire to get better – to play no matter what your obstacles – something that very much defined the man after which the league is named. Steve Nash was a Vancouver Island native, a local basketball phenom – a 6’3” Canadian kid who defied the odds to become a two-time NBA MVP and will go down as one of the most innovative passers of the game, leading Mike D’Antonio’s offense at the Phoenix Suns.

I looked up to see the smiling, bright face of one of my younger players – I’ll call him Clint – as he broke through my dinner-planning reverie. Something looked different about him, but I couldn’t figure it out, as this was only was the second time with my team.

“Coach – um – I am wearing new contacts for the first time today,” he said with bright, round, unblinking eyes.

“I will do my best, but I am having some challenges with my depth perception.”

You may be thinking about all the chores and work you have to do in life, but the moment he arrives and connects with you, he conveys the joy of just being there, of getting to play, to participate.

He is not a particularly strong player, but solid enough. When he gets the ball, he gets excited and you can almost see the 30 options running through his mind as he moves his hands and feet excitedly trying to figure out of if he should dribble, pass, shoot… or just explode on the spot.

He is a classmate of my son’s, and I remember him at a school band concert, playing the guitar: big dark-rimmed glasses, a cowlick coming from his blond head – and a winning smile that shone through the rest of the kids. They were resigned to taking the mandatory band class in intermediate school, but for Clint it was an adventure he seemed to relish and enjoy – as was basketball.

I try to remind myself – as I did this morning during my morning commute – that I should appreciate the opportunity to work with the people that I do: to be a member of their team. Yes, you can get caught up in the challenges and hassles of running an emerging tech business. We are building a great Transportation Management Software solution no doubt, but sometimes you get tired, dogged by the nicks and scrapes of budgets, customer issues, staffing challenges. But when I sit back and reflect on it, I try to remind myself that I should be more like Clint, more appreciate to just being in the game – given the opportunity to compete, to do something significant, perhaps to even do something great.

When I arrived at the game with my son we only had one player – just over 10 minutes before the game. It’s okay because it’s a fun league, the kids drift in, and when Clint arrived 2 minutes before our 5-minute warm-up began, he was our sixth player.

“Wow! I wondered what looked different about you Clint,” I said, as he continued to hold his eyes wide in an effort not to blink.

“You look good with your contacts. Don’t worry about it – you have to get used to them sometime and you are going to be playing basketball with them, right? So, there is no time like today to do it.”

“Great,” he said as he dropped his bag and stepped onto the court.

Surprisingly we jumped out to a 15-point lead in the first 10 minutes of the game as our more capable opponents were running ice cold, missing easy lay-ups and jump shots while our rag-tag of misfits couldn’t miss a thing and were riding the back of the one boy on our team that seemed to know what he was doing.

It was my basketball coaching debut and for the moment I was reveling in the fact that my there might have been something in my pre-game ‘Recipe Planning’ routine that might be on par with the way Phil Jackson applied native American traditions and rituals as he coached Michael Jordan and his Chicago Bulls to 6 NBA championships.

And when it got to 28–11 mid-way into the second quarter, I was ready to reach out to a publisher to see if I could get a national book deal: Recipes Before Basketball – Recipes for Life. Yes, I’d hit the speaking circuit with Jamie Oliver, Emeril Lagasse, and Wolfgang ‘Ball’, who would share great recipes for a delicious Steph Curry.

But after some adjustments by the opponents – the advantage of a 12-person bench – the pace of the game started to weigh upon my understaffed 6-person platoon. And with just over a minute left we were down 65–57, with only a ‘stop time for the last minute’ rule in place and my strategy to apply more pressure.

“Press!”, I yelled as we delivered the same medicine to the team they had applied – to great effect – to us at earlier points in the game.

We scored two quick baskets and as we intercepted yet another inbound pass, there was a mad scramble of tangled arms and feet and kids falling back at the top of the key – emerging from this human conflagration was a certain blond haired kid, with now severely tousled hair, blinking in amazement that he was holding the ball. With 2.5 seconds left, down 67–65.

“Foul” the referee shouted as she placed her left hand on her right arm and pulled it down.

Everybody in the gym – the 15 parents, even the two moms who barely watched the game drinking their Starbucks and chatting – got a sense of the moment.

Clint looked over at me with blinking eyes and a smile of amazement.

He had already chalked up 2 points in our 65-point effort, so he was on a roll. He had missed a few shots – but was able to make a good number of passes as his rather frenetic efforts seemed to knock the defenders off guard – as well as his own players on occasion.

But it was now Clint’s moment. A chance to tie the game.

I looked across the court to him, drew my right hand up, pointed my finger, and cocked it like a gun. Dropping the barrel softly towards him, I said,

All eyes were on the boy as he let go perhaps one of the most elliptical shots of the day.

NBN. It was ‘Nothing But Net’ baby!

Clint had tied the game and after a quick inbound pass and a desperate throw down the court – the game was over. It was a 67-67 tie.

The team all cheered. They cheered and congratulated the wide-eyed Clint. Even the other team gave him a high five!

As I arrive here this morning to Tailwind Transportation Software I feel a bit like Clint. Happy to be here, with everyone – making a few errant passes, no doubt – but playing the game. I think that all of us have a little bit of Clint inside us. The seeds of doubt that wonder if we can do it, sure – but appreciating the opportunity.

And after seeing what he did on Sunday, when his moment arrived, I have no doubt that for the men and women of Tailwind, that we will rise to the occasion – cause we know that this is our moment.

This is our moment – not only tie but to win the game.

And we will not blink.