When you talk to Arnold Knaggs about his business, about trucking, even life in general, two things stand out:

His unyielding belief in the power of self-reliance; and how perseverance can lead to growth and success, when lesser souls may have just given up.

“People don’t fail due to outside circumstances – due to other people, due to the economy, or a particular situation – they actually fail ‘themselves’, their belief in themselves.”

It’s an attitude born of growing up and living in dairy farm country in North East Michigan, just 20 miles from where he was born – a farming community about 90 minutes north of Detroit. It has been a tough go for the locals there: the economy has been difficult owing to turbulence in the worlds of auto-manufacturing and dairy farming.

“Around where I live, it’s one of the most challenged areas economically in Michigan. It started many years ago – used to be a lot of dairy farms here, but some closed down and others merged. For me, after working on dairy farms for 22 years I realized that I had to do something different. So, I started earning a living with one truck, no money and a credit card – and went from there. For me, trucking is not so much of a job as it is ‘my life.’”

Knaggs grew interested in trucking from a relatively young age.

“My neighbors used to haul milk from the farms, and I liked to go for rides with them in their trucks. As a kid I just wanted to be in one of those Big Trucks… I remember even as a kid getting a big package in the mail from the Mayflower Moving company. I had applied to be a driver. I don’t think they knew that they were sending it to a 13-year-old!” 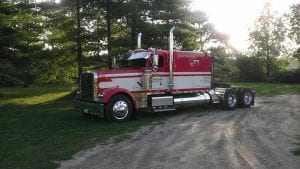 Knaggs now runs a 40-truck operation out of Carsonville, Michigan, with a second location in Dearborn. He provides primarily flat-bed service, hauling scrap metal to a brass manufacturing facility, and then hauling out finished product to stores and warehouses across the US. His Dearborn location provides dry van service to a local Amazon facility, and to several other smaller customers. He had 5 trucks back in 2006 and has seen his business surge to over 40 trucks as he grew in a measured and prudent manner over the years.

“We stayed at it. We looked at expanding before, but it was 2008 and things were not good then. Now it’s a lot better, and we feel good about where we are.”

His Philosophy on Life

No doubt Knaggs has seen tougher times. And it informs the way he approaches his business today.

“I don’t do ‘rich’ well,” he shares, a profound statement that could resonate with a lot of other trucking company owners whose primary goal is to build a great business and provide a legacy to their children their community.

“I grew up poor. I understand and appreciate what it is to work. I didn’t get into this to be rich, I got into trucking to make a way for myself, to work for the things I wanted to achieve – security for my family, employment for others in my community.

I didn’t finish high school, I didn’t go to college – not because I couldn’t – but because I looked at it this way. In life ‘you work’, or ‘you don’t work,’ and living in an economically challenged area, I decided that this was the best path for me. I was going to find a way to work. For me, it’s not about trying to get rich, or being rich – it’s more about working because that is just what I do.”

Knaggs decided to invest in Tailwind software back in 2006. At the time he was one of the earliest adopters of new technology that could ‘separate him from the pack’.

“I could keep track of everything on paper, and in my head, when it was just one truck. But then we moved to 5 trucks and we tried doing it all in QuickBooks… and we couldn’t. It wasn’t made for trucking – it’s an accounting system. There were not that many software systems around, but I remember how good the Tailwind people  – like Jon, who I think is with you guys even today – how good they were to work with. We needed it primarily to keep track of all the invoicing to make sure that we got paid. Every dollar counted back then, just as it does now.”

“And I remember asking if you could connect my office and my home so that my wife and I could access things from both places – and you guys set that up allowing us to remote in. I always felt that having the internet and using it would help our business.”

Converting Over from Tailwind Legacy to Tailwind Online

This past year, after 12 years on the Tailwind CMS system, Knaggs made the decision to convert over Tailwind’s online version.

“It’s a natural evolution really. We used to remote in to the office. We understand the Cloud – it’s something everybody is using these days, so we thought it made sense as we grew to two offices here in Michigan.

For us it’s been a good move because the software is the same. It does all the same things, but it does have a newer, more modern interface, but it’s the same application with some additional benefits. What’s really helped is the fact that we were able to port all of our documents and data over.  And the service and help we got was great.”

And in Arnold’s direct and honest manner:

“I am not sugar-coating this, or blowin’ smoke by saying this stuff, because I happen to be talking to you – you guys did this…

If you want to build a business, you first have to believe in yourself. Then you find good people, you invest in some equipment, and you invest in some technology like a TMS application, that is going to help you, so you don’t have to throw more and more people on it. We run pretty lean with 6 people – my wife and I are two of them – and we are running the 40 trucks – a combination of owner-operators, contractors, and company drivers.”

“Some people, when they look at technology, and they see a threat. They get fearful of new things and wonder why they need to do it. But take ELDs for instance. Yes, it adds cost, more overhead. But I didn’t focus as much on the added burden as much I do to the fact that I can now see if one of the drivers is sitting idle and running his engine for 20-minutes.“

With a successful transition from Tailwind’s Legacy software over to its online application a few months back, Arnold looks forward to all the ways in which Tailwind’s web-based software can help his business now.

“I can see a complete picture of both our locations and better manage the growth of two offices. I have all the information in one location – no dialing in using remote desktop – I can now access all the information from both offices and from home, or when I am traveling.”

Which is not to say that he thinks Tailwind is the perfect application. “Yes, there are a couple of things I would like to see added – more visibility into some of the costs of a truck and the driver – and I have already submitted those requests. That ‘in-app chat’ in the new online version is a good feature. I send them a message and they get right back to me.“

With a wellspring of determination, an openness to trying new things, combined with the insight from over 20-years of trucking experience, Knaggs is in a position where he has more options than ever. But he has never forgotten the power and value of a good day’s work and knows that his success was driven by the original hunger he had to change the course of his life.

Much like the scrap metal he hauls to the manufacturing facility, he has been able to take all the pieces and resources available to him in his life, and roll them all together to create a strong and durable finished product – one that endures.

Today, more and more of his trucks roll further and further than before, more often than before, running better than before, and they all return back home at the end of the week because of the company’s 5-day workweek policy – a nice work-life balance for his drivers, and for their families.

And while many people aspire to create vast empires to accumulate wealth and prestige for themselves, Arnold Knaggs is a man with his feet planted firmly on the ground, on the farm soil of northern Michigan. Comfortable with himself and with others, serving as a model to everyone in his community, by his presence, by the success of his business. He knows that some of the best things in life are found not in faraway lands, but right here at home.