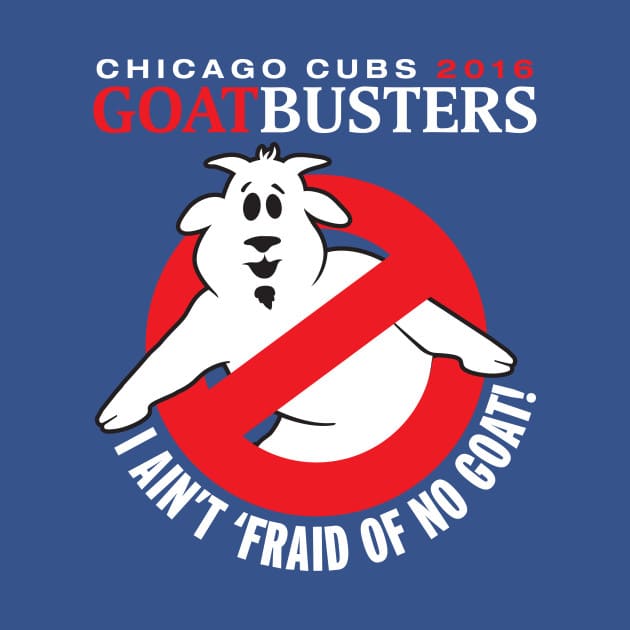 After a 108 year wait, the Cubs have finally won the World Series.

It’s one thing to be on a team that plays in the World Series. Another thing to win a World Series. But it is an entirely different thing when you carry legacy of a 108 year drought. Exacerbated no less by someone giving it a life of its own – naming it as the ‘Curse of the Billy Goat’!

Sometimes you see NHL hockey players reach back symbolically behind their heads, between their shoulders, and pull with their glove pretending to throw something away from their body. They do it after a goal. It a metaphor – getting the ‘Monkey off your Back’.

But this wasn’t a monkey. It was much more. It was a entire goat! And it wasn’t on their back. It had been chewing on their infield grass, gnawing on their pant legs, and quite often taking big chomps out of the catching gloves and baseball bats at the most inopportune times over the past 108 years. That’s some goat!

Everyone can cotton on to a ‘loveable loser’. But inside the ‘lovable loser’ lies the pain and fear from once having hoped too much. Having been hurt one too many times. Them not wanting to ramp up the ‘hope machine’ once again only to have the gears jam on it.

There were incredible moments of drama – the stuff of movies.

Chicago’s catcher Brian Ross hits a home-run in his last game as a Cub  – after having two runs scored on him as he was unable to recover quickly enough from a wild pitch.

Indians Center-fielder Raja Davis gives up a run and a concedes an extra base with some mistakes in center field – only to hit a 3-run homer in the bottom of the 8th inning to tie the game.

A suicide squeeze bunt that goes awry. Cubs’ second baseman Javier Baez angry at the call, he, having hit a home run before.

Two former teammates with the Yankees earlier in the season – the Cubs’ Chapman and Cleveland’s Miller – now the flame throwing closers for each team – days spent previously together in a bullpen – now competitors on the same mound fighting for a World Series ring they once thought they might win together.

For me the most memorable moment of the series came on the last out of the game.

On the scorers sheet it will be recorded starkly as 5-3. But it was much more than a ground out from third base to first.

In the super slow-motion video replay you will see Chicago Cubs third baseman –6’5’’ Kris Bryant – charging the baseball, grabbing it in his glove and firing it over to first baseman, Anthony Rizzo, for the final out to win the World Series for Chicago.

But what I will remember most is ‘the smile’. He is joyful and energized as he picks up the ball and makes what was a ‘less than professional’ throw to first base. It’s as if he is that Little Leaguer he once was, who is just delighted to have the chance to ‘make a play’, putting that final ounce of energy into a throw before falling to the ground in exhaustion.

It is in this play as he is moving to the ball – you see the ‘monkeys flying off his back’, ‘pigs flying in the sky’ and ‘goats spinning, tumbling on the grass’  as he picks up the ball, makes the throw and collapses to the ground in exhaustion AND exhilaration –  like a little boy.

We all carry something on our backs, some chains around our legs, some obstacle unseen AND entirely of our making. And it is only when we let go of these obstacles and find the intrinsic joy of ‘the doing’ – a joy not found in the destination – that we really find success in life.

Yes… YOU can win! You can unshackle yourself your demons. And you can do it with joy just like Kris Bryant did on the final play of the game to win the 2016 World Series for the Chicago Cubs.