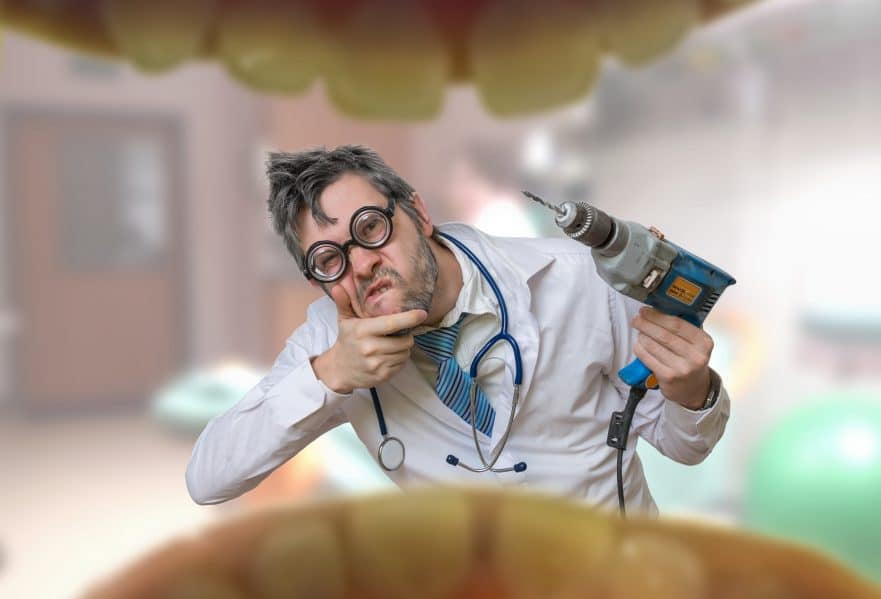 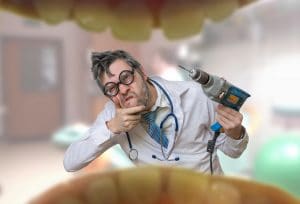 It’s been a rough couple of weeks for ‘Brad the Marketer’ in our office at Tailwind Transportation Software.

I could tell he was off his game.

First there was one morning last week he came in and said “gosh” three times in row.

And the next day I could see that he had two different socks on and couldn’t figure out what pair of ‘office shoes’ he should pull out of his bottom desk drawer. Clearly stressed is all I will say.

I wondered if having two young boys at home, his wife returning to work, and nanny challenges – that this might be playing on his psyche.

So I thought it was time to reach out to him and help, so I said to him compassionately,

But even at that, I could see that he was still upset.

It ends up that he had gone three times to get a filling replaced… and the filling fell out each time, the latest occurring over the weekend.

I wondered if he had mistakenly gone to a local dollar store to get his dental work done, but it ends up that this was work done by certified dental professionals. So you can imagine the bother for him, of going back and forth to the dentist office only to feel another hard nugget as he bit into his filet-mignon on Saturday night. Ends up he has been relegated to eat his spinach and quinoa salad on one side of his mouth.

Infrastructure problems can affect everyone. In the same way that everyone in our office is feeling down because of Brad’s filling – or lack thereof – in the freight industry, the wear and tear on the highways and bridges can drag everyone down.

In 2013 a bridge over the Skagit River collapsed shutting down I-5, a vital highway link in the northwest connecting British Columbia Canada to Washington State. It was caused by a trucking mistake in which an oversized load struck an overhead support beam on a bridge not sufficient in size and scale to the traffic that traverses it day in and day out.  The bridge was built in 1955 and was classified of “functionally obsolete”. It was a particularly memorable event for me because my wife and kids had crossed the parallel sister bridge going south to Seattle earlier that day.

For the past six-months as I drive to work to our trucking software business in Delta BC I drive several areas of construction on highway 99 as the province of British Columbia is preparing to build a 10-lane bridge to over the south arm of the Fraser River. It is being built to alleviate the massive traffic congestion going through a 60-year old, four-lane tunnel under the Fraser River that connects Delta and Richmond, BC.

This bridge is a key piece of the infrastructure that facilitates everyday car traffic to the downtown core of Vancouver – a metro area of 3-million – and provides vital links to both the large container ports at the Delta terminals and truck traffic to the US border. It is a well researched and considered piece of infrastructure that will help promote trade to Asia, US & Canadian trade, and alleviate problems of congestion. It is the biggest traffic problem in all of Canada.

A pending change in government in BC is putting the entire bridge project in a state of suspense (pardon the pun). It hasn’t been helped by some of the waffling statement by the incoming leaders of the coalition government.  I can see that the roadwork continues as the access to the bridge site is being widened in preparation.

While we live in a beautiful part of the world that must be considered and protected – a world nature site, bird flyway, and a protected agricultural land reserve – this is a responsible and well considered piece of infrastructure that is supported at the Federal, Provincial and local municipal level. Unfortunately with the upcoming minority coalition government giving sway to some of the parochial concerns of the various municipalities around our region, the entire project is under review. When you are the mayor of a municipality I guess its okay when you get your new sky trains and bridges, but if someone else gets something you find it unfair.

And therein lays the problem. There is no politician who will ever run on raising taxes. We have to look at ourselves in the mirror on that one. The alternative is to make trade-offs on other budget items and that can be pretty problematic, as we have seen in both Canada and the United States.

As such I don’t have much faith that our infrastructure problems will be ending soon.

We just might have to get in line and wait our turn to get through our old tunnel for another ten years.

I just hope Brad finds an alternative route when he heads back to his dentist.