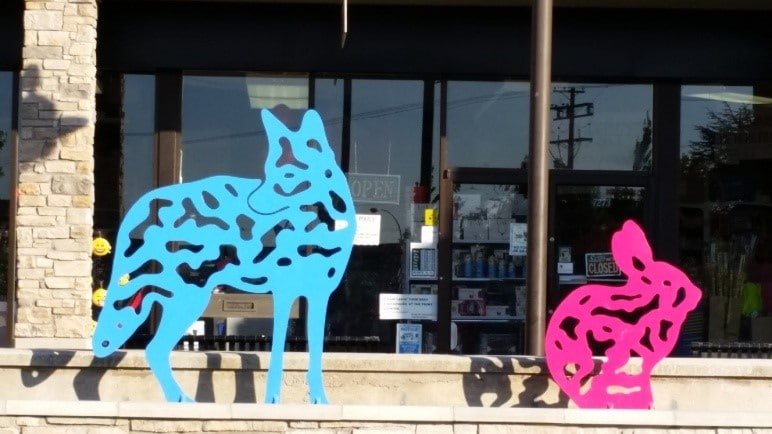 We have all been in those meetings haven’t we?

You know the ones. It’s a hot room. People all sitting around going back and forth from each sandwich tray, grabbing the remaining stale ham & cheese wedge, or hardened cheese blocks from two-hours earlier. It’s a situation where a group of people have hit a roadblock, where they have just run out of ideas.  I mean, what better place to come up with a breakthrough idea than with 7 or 8 other people dressed in business clothing in an anti-sceptic meeting room, with that harsh white lighting, and a BIG, I mean BIG, whiteboard where you can come up with that one BIG idea?

Then someone offers up

“Hey,  maybe we could add a men’s electric razor to the top of the Blackberry?”

And someone else says

“What about like a Swiss Army phone? It converts what you say into four languages, keeps really good time, and you can open up a beer, or filet a fish for dinner?”

And then the thunderclap.

“Hey, we could create all of these crazy characters we used to produce on cards…and have them show up on smartphones… fooling them that they are actually at that physical location but actually just on the phone… in an augmented reality sort of way?”

“Hey, why don’t we put up a Blue Wolf and a Pink Bunny in front of the mall?”

Then one guy adds

“You know… you know… that Blue Wolf idea has some merit…”

“I used to have a Pink Bunny as a kid”

And before you know it – you have made an essential decision about your business. You have a project underway, and next a construction crew is out front knocking down those annoying bushes and replacing them with …well… a metal Blue Wolf… and a metal Pink Bunny.

If you travel way up to St. Paul, Alberta you will see that their centennial project in 1967 was a UFO landing pad. The Canadian Federal government was doling out lots of money to cities and towns to build something memorable – some infrastructure – to commemorate the 100th anniversary of Canada. Everywhere you travel in the country you will come across cities and towns with a Centennial Arena, or a Centennial Park, or a Centennial Auditorium. But in St. Paul – and nowhere else in the country – you will find a Centennial UFO Landing Pad. You can just imagine that when ET came out in 1983 one of the city fathers involved in the decision was saying to his detractors

Our trucking and freight broker software business is housed in a set of business offices attached to a mall. Every morning when I come to work I get to see the Blue Wolf and the Pink Bunny out in front of the mall. I park my car and walk past them to my office.

They always make me think. Not so much that they are there – I pretty open and flexible when it comes to works or art or decorations or… flower beds. But it does intrigue me every time I see them because it makes me wonder how the decision got made. ‘Who’ and ‘How’ did they decide on the two animals and the colors of those animals?

“I get the Pink Bunny Fred, but that Blue Wolf… hmm… where did that come from?”

It makes me think of how decisions get made in businesses, and in our trucking software business in particular.

I want to work in an empowered organization – one where each team member is able to apply their skills and knowledge to the tasks and situations that they encounter. They apply those to make good decisions. The ability for our trucking software organization to grow and scale in the months and years ahead will rely on our ability to make decisions, to learn quickly – to learn from our mistakes and make adjustments quickly. And giving people the ability to make decisions, means you have to be willing to, not only accept, but welcome mistakes.

In accepting these mistakes I am hopeful that as a leader I have reinforced the right values associated with our vision and mission – to the degree that my staff can make judgments as to what is right and what is wrong for our business.

I remember an event from my first executive job. I had met with my administrative assistant giving her an outline of the entire strategy for our business and our department. I empowered her to manage my schedule and provide access to me based on HER judgment as to whether that person would move the business forward. One day, when she came down to tell me that someone was waiting to see me she offered this aside

I stopped her there and said

“Well then, I don’t mind it if you went down and told him that I won’t see him.”

“If he doesn’t meet the test of someone who is going to work well with my teammates – and you have figured that out from a short interaction in our lobby – then how is he going to be a good partner to us in the long run?  If he doesn’t pass muster with you… he won’t with me.”

So we turned Mark Cuban away…. okay… just kidding. I can’t remember who that was. I hope it wasn’t Mark though… I like him – not so much a basketball owner but a considerate and often generous man on ‘The Shark Tank’!

When you empower your staff to make decisions you have to be willing to accept the fact that things might not turn out exactly the way you want them to. You may not be enamored with that Blue Wolf or those Pink Bunny’s in your business. But you learn to live with them because you know that you will have instilled a greater value in your business. You have instilled in them a sense of ‘ownership’, a sense of ‘this belongs to all of us’. They will care more, and do their darndest to make the right decisions for something that they are part of.

And besides – I know people might not have liked my Purple Elephant and Orange Unicorn idea.