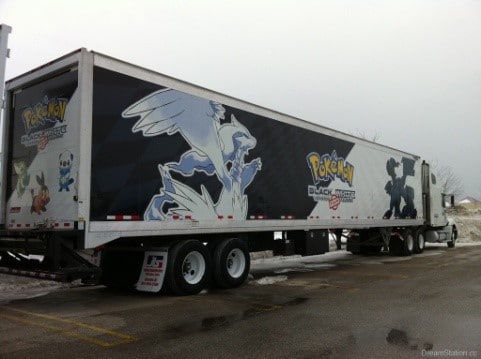 “Look…..I just found a Load over by the hockey arena!”

And with those words Harold Wicks kicked his 2023 Peterbuilt into gear and drove quickly to pick up his load ahead of the four other big rigs trying to catch up with him.

“That’s the third load I found this week!’ said Wicks with great enthusiasm.

It wasn’t a real load though – it was something quite new to the world of trucking. It was an ‘augmented reality load’ or an ARL .This is something of a phenomenon breaking out around the world of trucking. It’s a new concept where truckers are competing to find loads in a variety of locations around the world. All they need to do is drive their trucks to a specific location found on their GPS – and magically a load will appear.

“I got a load of lumber just sitting beside this field of carrots,” said Carmen Lopez, of Lopez & Sons Trucking from Modesto, California

For these truckers, the new Truckemon Go trucking software app has been a godsend as their business has dried up with the recent economic downturn and slow summer season. Many truckers have given up on the Loadboards and are now found wandering around the roadways and streets simply looking at their in-dash screens trying to find the next ‘augmented reality load’ closest to them.

“These aren’t planned loads, we just sort of run into them,” said Alice Barnacle of Skokie, Illinois. “And these aren’t like real loads either… these are like wild loads- wild loads just out there waiting to be picked up.”

“We have all these truckers out on the road, driving through neighborhoods during the days and throughout the night, looking for some Load Pokémon thing-a-ma-jiggies. It’s just not safe at all.”

The inventor of the Augmented Reality Loads – Load-o-Matic – has seen their stock price shoot through the roof with the invention of the new load finding service.

I reached out to Load-a-Matic to get their thoughts on the overwhelming response that truckers have had to their new concept. Head of investor relations, Heather Roadbing, spoke on behalf of the company:

“Well, we just sort of got tired of trying to find carriers that could take our loads. There was such a driver shortage, and all then we thought, ‘why we don’t create some loads for the ‘driverless vehicles’. They seem to be all over the place.’ We thought that if we give them some incentive… like a weightless load…then they could pick them all up and optimize their fuel consumption”

“This is a real poke in the eye in my opinion,” said Bob Enforapples, president of the Independent Truckers Consortium.

“It’s tough enough trying to make a buck in the real world. Now we have a bunch of companies trying to find a way to make money driving in the virtual world. I mean, how the heck are they going to make money on this?  They have trucking software that created the paperless office. They have driverless trucks where you don’t need a driver. And now we have loads that have no dimension… that have no weight. I just don’t know where this industry is going.”

“We have half or our drivers in the nation now congregating at these gol’ darned Truck-e-mon Stops,” said Armand Roadstrips, Chief Dispatch Officer of Central Trucking out of Omaha Nebraska.

“They all take off after one another… some idiot saying something like, ‘hey …I found a load by the library – and then ten big rigs start roaring through the neighborhood trying to get there first. Farmers have corn sitting in their fields and we can’t find a flippin’ truck!”

The Truckemon Game is a collaboration between Google, and the famed Icelandic Game Developer Sven Gaborjensenbensenjohnnssen of Reykjavík Virtual Reality Corporation (RVRC).

“Well…. I tought it might be gooooood if we helped out all the poor drivers of da vooorld  find da loads all over da place. So I called Goooooooogle and asked if I could tap into their Goooogle Maps to place these loads all over da place,” said Gaborjensenbensenjohnnssen from an under-determined location in Iceland where he was on the set of the hit reality show ‘The Really, Really Ice Road Truckers’.

“It has been successful behond our wildest dreams,” he added. “But da heads of all dese big trucking companies are not too happy. Dere drivers are sitting at da Truckemon stops or filtering their way through da neighborhoods.”

The game was released in Canada, New Zealand, Australia and the United States on July 3. Due to server breakdowns from high demand upon release, Load-a- Matic stated in a press release that the rollout has been put on hold in other regions while the servers have been put into the repair shop for maintenance.

A new ‘Truckemon Go Plus’ app, which will include Intermodal and Drone shipments, is apparently scheduled for a fall release.