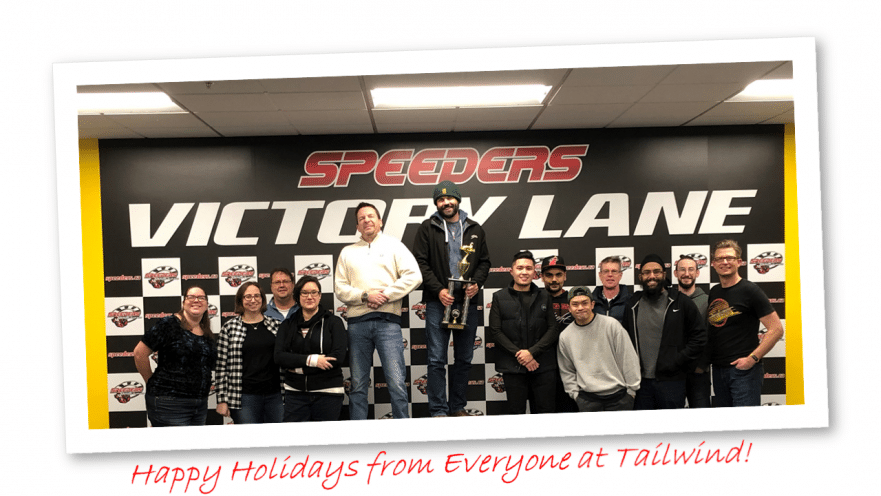 It’s that time of year again, when the nights grow long and the days grow cold – and there’s nothing like a bunch of colourful lights, glasses of eggnog, and merry gatherings with friends and family to help remind you that things are probably still going to be alright. Also, it’s Christmas!

In the spirit of the season, we thought we’d share a few images from some of our recent Tailwind holiday events.

For our Christmas party this year, Tailwind decided to put the pedal to the metal at our local, state-of-the-art Go-Karting facility. A little friendly competition is just the thing to bring coworkers together… and there’s nothing like cutting someone off going through a hairpin turn to really bring out that Christmas spirit! 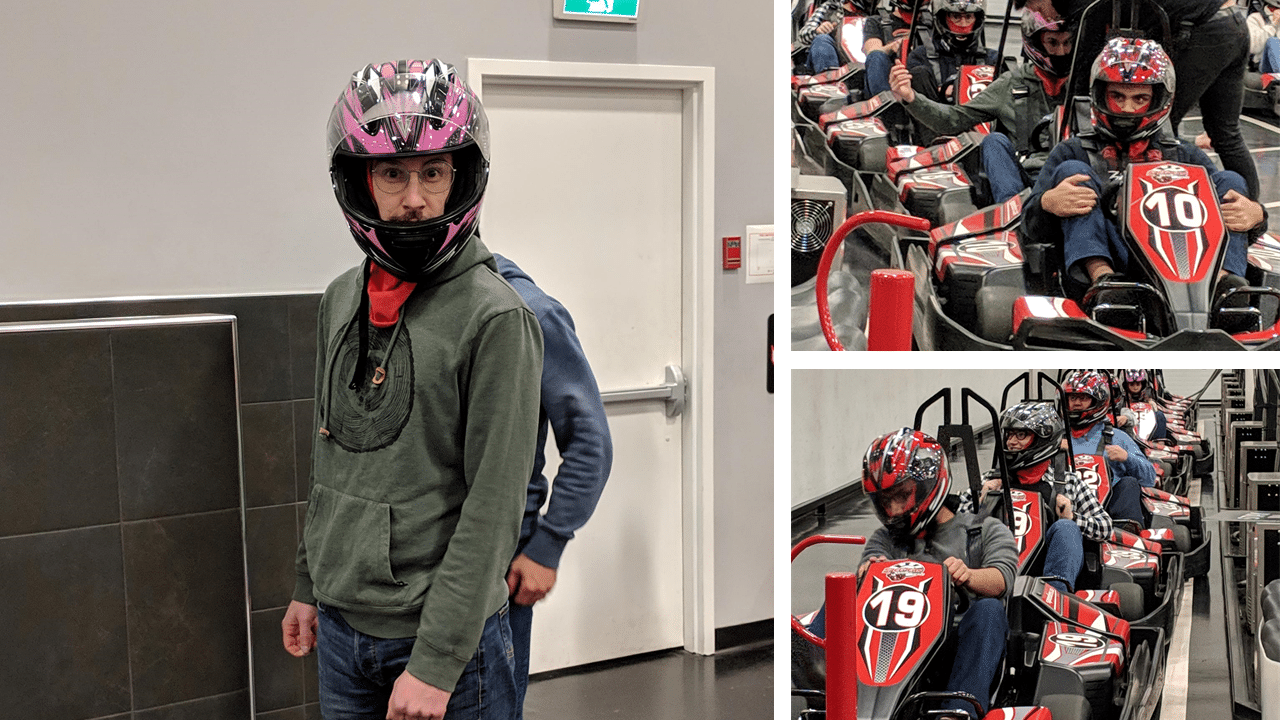 Everyone gets suited up and ready to race. Helmets seem important. Especially for the developers!

Out on the track! Sadly these images fail to capture the many near-collisions, or the vivid holiday cursing. 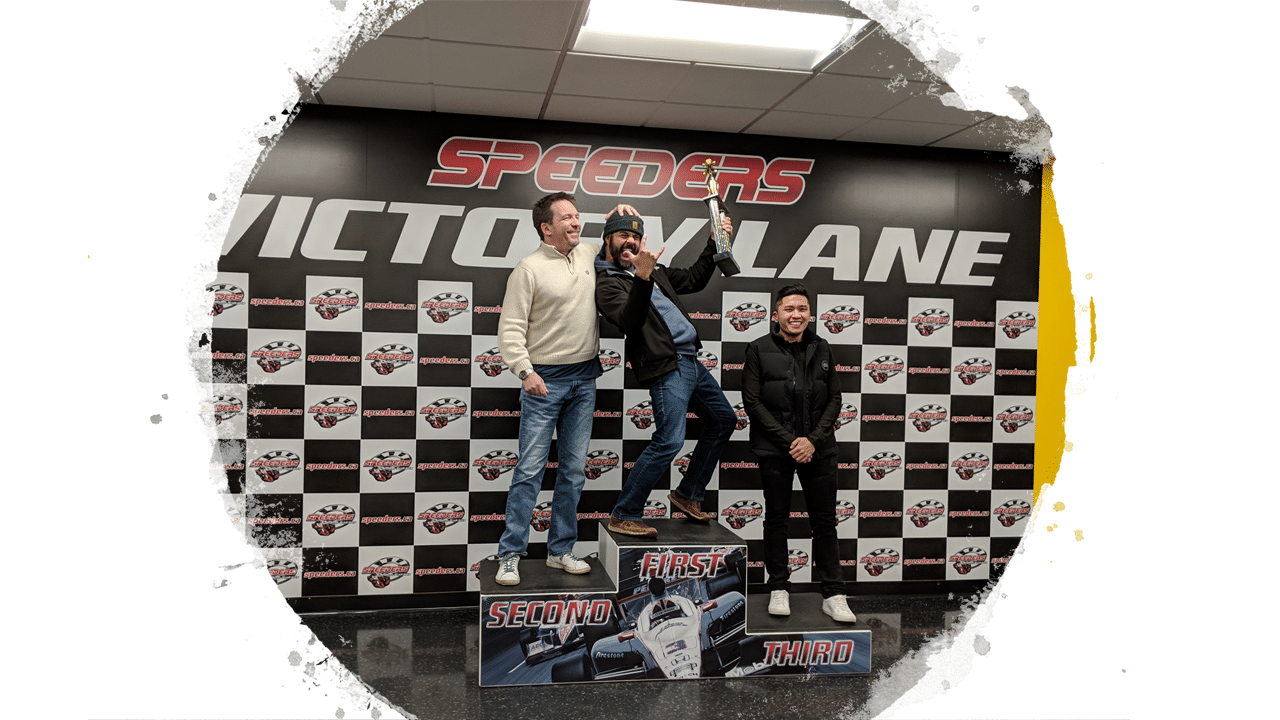 In the end, there could be only one winner. Congratulations to Robert, our CFO – as you can see, he remains humble despite his success.

An Office Tradition: the Gingerbread Truck and/or Vehicle Decoration Showdown

Tailwind also hosted the second annual inter-departmental Gingerbread Decoration Gala, in which everyone at the office sets aside a couple of hours of intense, agonizingly creative labour to produce the most wonderfully- and meticulously-decorated gingerbread vehicles the world (or at least their colleagues) have ever seen. This year’s entries were even more wondrous than last year’s, which bodes well for the future of gingerbread design.

Unfortunately, the organizing committee failed to assign a panel of experts to determine which department’s gingerbread vehicle was the best – so you’ll have to be the judge! 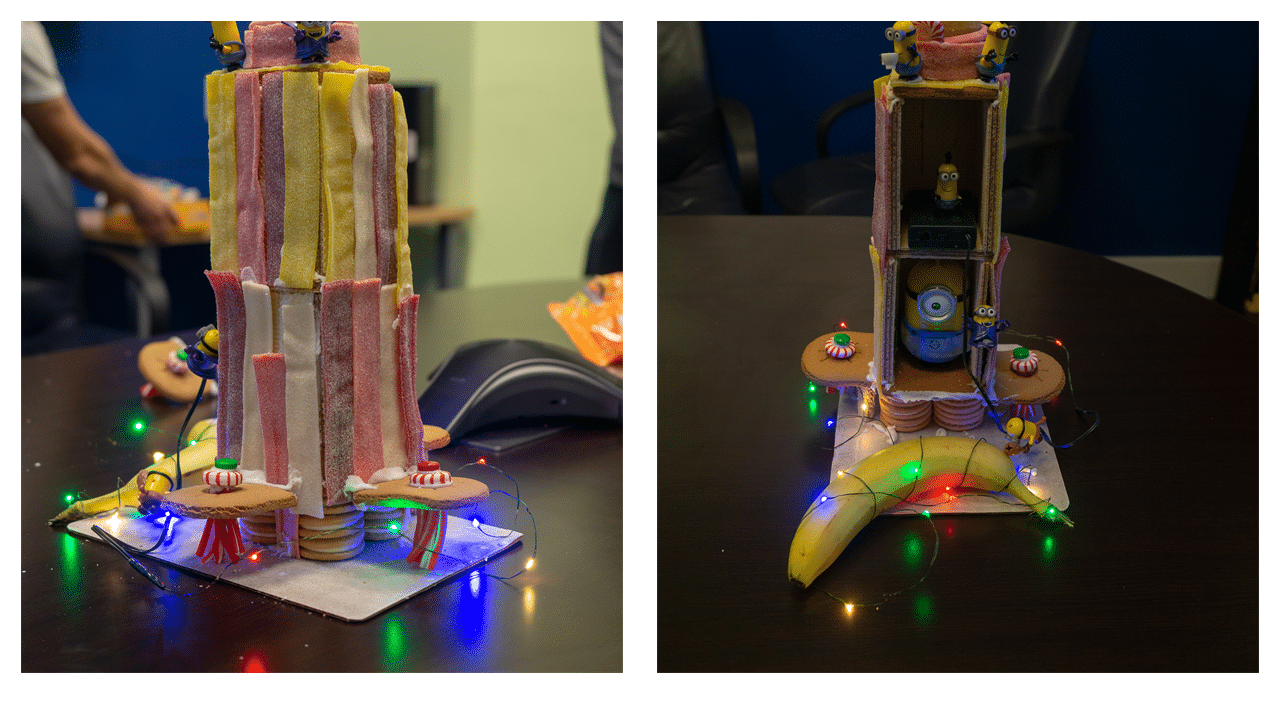 The Dev Team stayed true to their obsession with strange, yellow, one-eyed creatures who have evidently decided to build a sour-taffy rocket ship. Its cargo? A banana, of course. 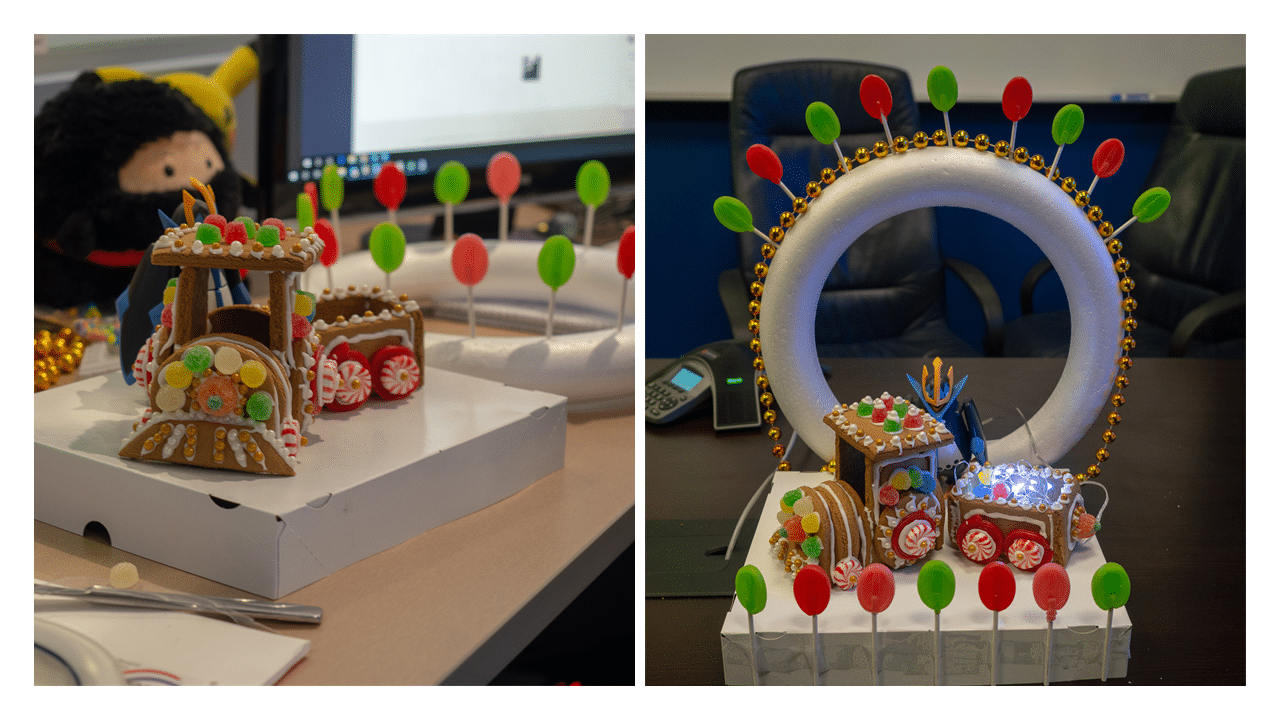 Seen ‘under construction’ in the first image, the Support department’s final product (second image) brings a strong sci-fi mood to the season. Why fly a rocket ship to the moon when you could drive your remarkably well-detailed truck full of glowing space-cargo into a giant dimensional portal? 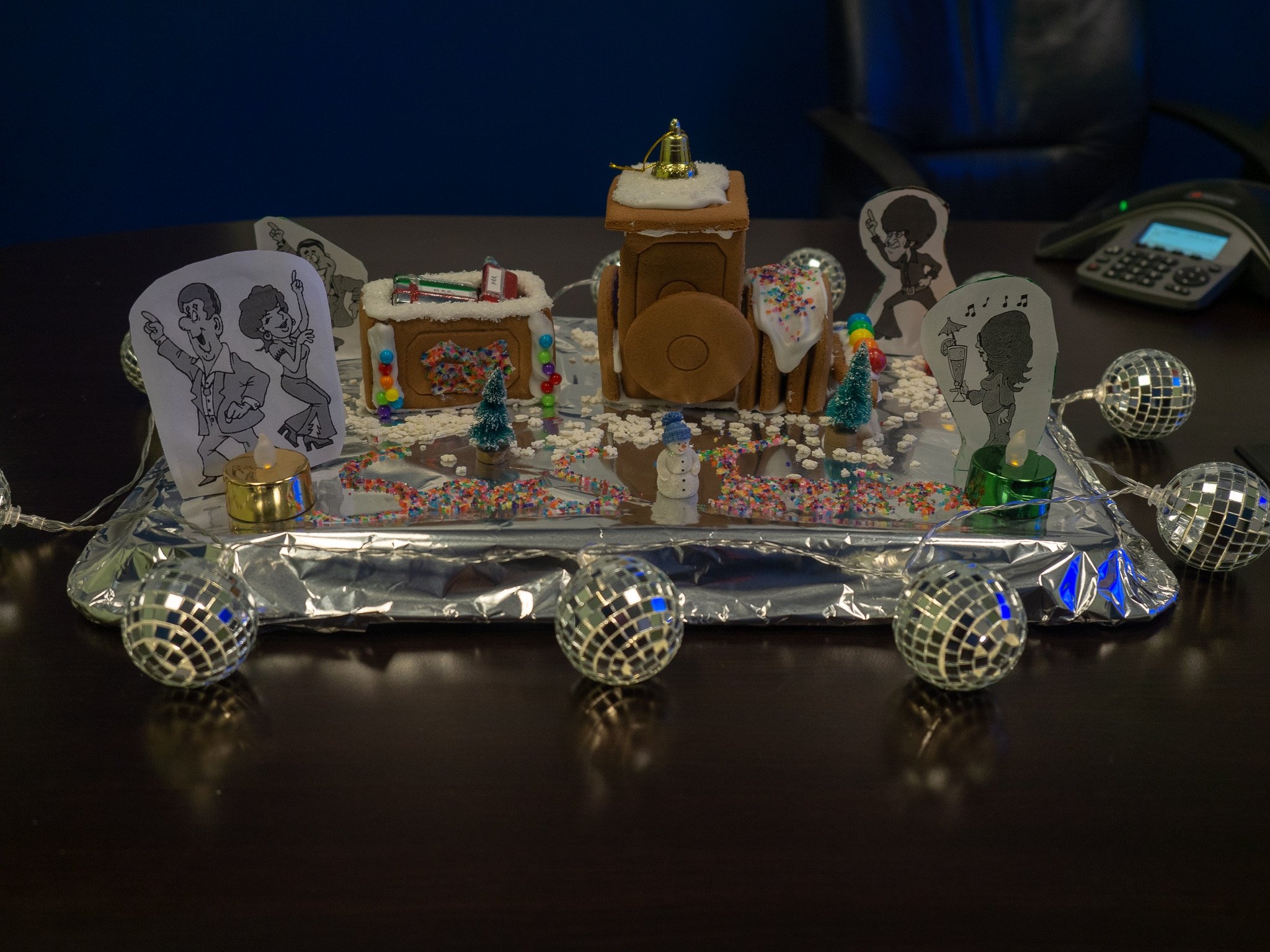 The Sales Department put together a classic disco-themed landscape, complete with glitter and cocktails. Sadly, the camera failed to capture the full glory of the disco-ball illumination – you’ll have to use your imagination!

One More For the Road

We hope you enjoyed this visual tour through Tailwind’s holiday season so far – and we hope you’re enjoying your own seasonal fun! It’s a busy time of year for everyone in the transportation industry, but don’t forget to take a moment, grab a warm beverage, put up your feet – and remember what all this busy-ness is for. 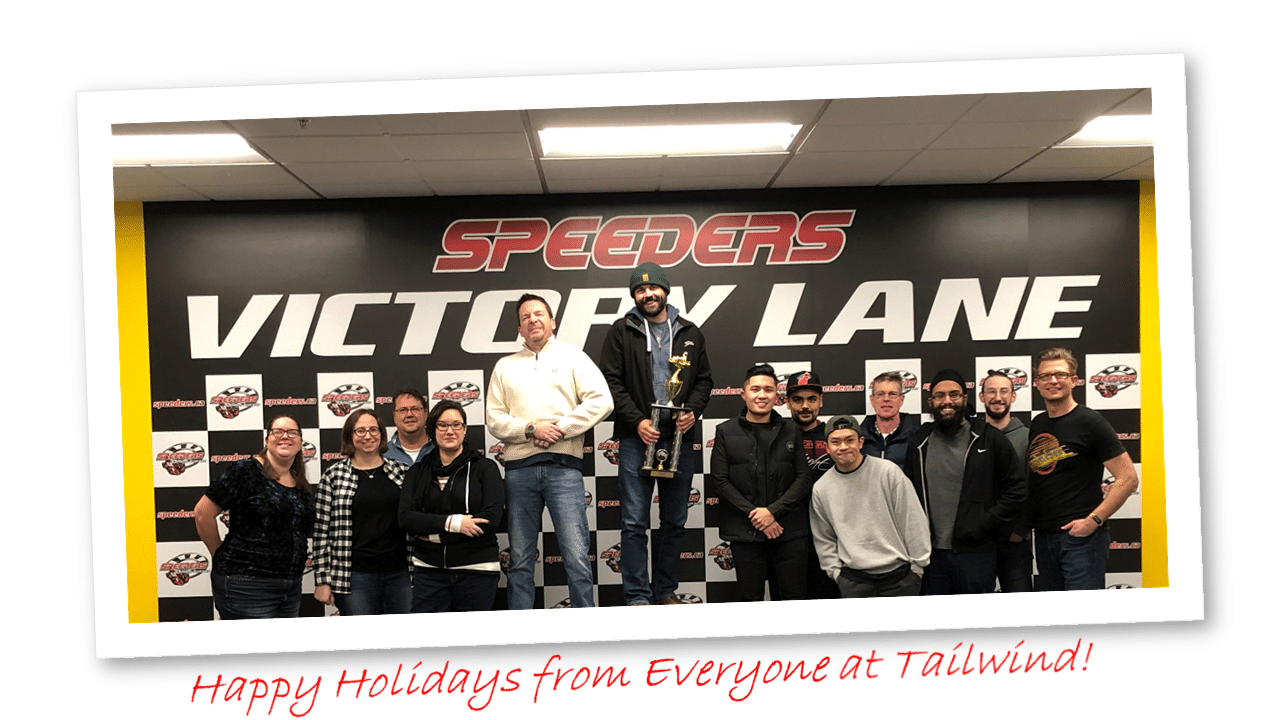