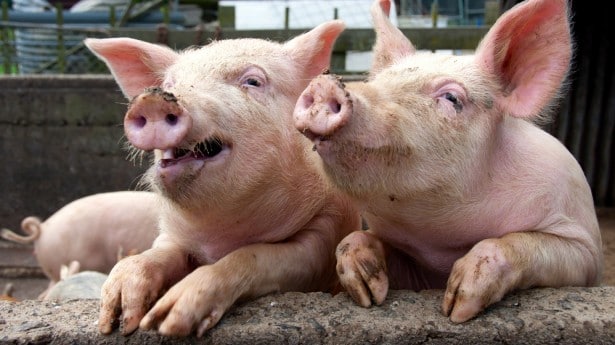 ‘When you come to a Pork in the road…… take it!

The lines are endless here – I can just piggyback on every joke that’s been delivered on this topic.

But when it comes to creating new highways these folks really have their _ _ _ _ together. Well not exactly theirs… more like the pigs’.

This is so exciting to hear. New highways made from pig manure.

“Was that your tires?”

“I don’t think so……did you hear something”

“I heard a squeal”

“Really……..hmm……….I will have to listen more carefully”

Comedian Pete Barbutti used to appear on the Johnny Carson’s Tonight Show from time to time. He had a goatee and carried an unlit cigar in his month. He would tell dry, sometimes sardonic jokes. I think he was a bit of an acquired taste, but because he was so unique I really think the Tonight Show staff and performers liked his slant on things and would invite him as a guest quite frequently. He came across as a veteran Vegas comedian, but more laid back. He told this memorable joke (well, to me anyways!)

‘An Insurance Salesman approaches a farmer who is standing in his farmyard. In the middle of his sales pitch he looks over and laughs at the sight of a pig standing there with only 3 legs.

The farmer asks him somewhat menacingly

“What you laughing at?”

“Well, c’mon….it’s not every day you see a three-legged pig. It does seem a bit weird”

“That little pig saved the life of my little boy. He had wandered onto the highway just out front there. A car was careening around the corner…just like yours was….and that pig jumped out and knocked over my little boy into the ditch…and saved his life”

“Darn right it is”

“So did the car clip him and hurt his leg or something?”

Can’t wait until they figure out what to do with all those skunks and armadillos.