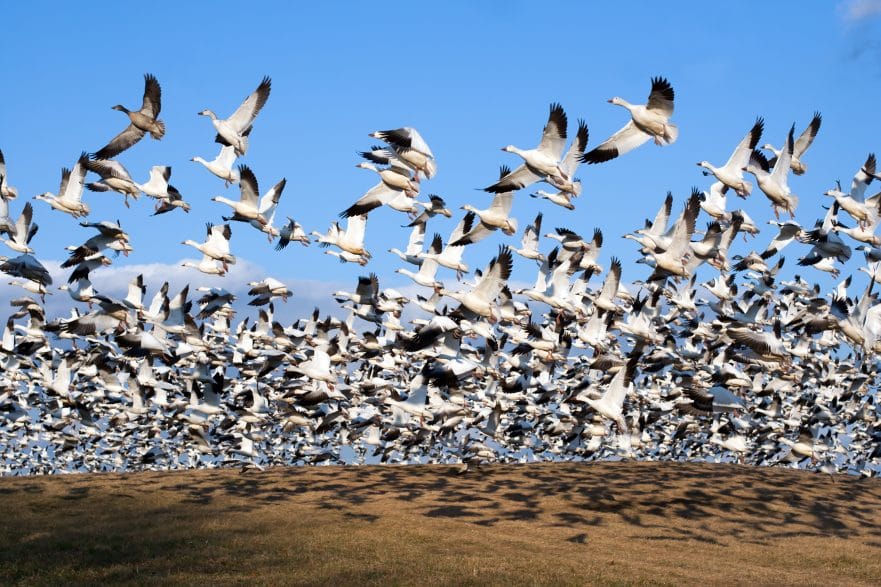 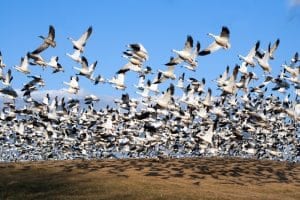 As I walked out on the dyke that keeps Boundary Bay from pouring into our homes, I watched one of the most fantastic shows of the year. It was put on by Mother Nature herself.

In the midst of a sunny and warm day last month, I looked out over the bay to see, once again, thousands and thousands of snow geese returning from their summering in Wrangel Island, Russia. They are literally our very own ‘Canadian Snowbirds’.

(We get these from Russia, and then we send another group of snow birds in their RVs down to Arizona, California and Florida to ‘winter’ there. Many people don’t know but we have a quota for snow birds, so this like a gigantic game of dominoes that is played out across the continent…)

While the kids were enjoying video games or watching TV at home, I was out enjoying a walk – thrilled at the show mother nature was offering to me. Everywhere in our little town of 20,000 you could hear the snow geese flying back and forth – between the Reifel Bird Sanctuary to the Spetifore lands. But it was when I went down to Centennial Beach that the real action took place.

I watched vast flocks flying in and out of formation – some twisting wildly to catch a thermal updraft – joining up with the others. I enjoyed watching a few of the flocks flying under and over each other at different altitudes, going in different directions.  I counted (as best I could) a flock of 220 combining with another group of 70, without so much as a tip or bang, and then turning around to go back from whence they came.

It was a brilliant display of indecision, or bad decision-making because they just couldn’t seem to decide which way they were going, where to land or whether to stay in one spot, but at the very least, they were together.

I marvelled at the honking – the cacophony of the flock. It was if they were all shouting to one another

‘Oh yeah… its this way… watch this’

The leader was discernable only by the fact he/she was at the head of the formation, but that too changed frequently as the lead goose would drop back, consumed by a pivoting flock like a Tour de France cyclist who took off too early ahead of the Peloton.

Sometimes they were flying East. Then they would be heading West. And ironically, quite often they were actually flying north towards the North Shore mountains – ironic in that they should be flying south for the winter.

But it is interesting to note that they all end up in pretty well the same place. At times, they were flying in perfect formation – one gigantic fluttering V – looking like some blinking disco lights with their snowy white bodies and black wing tips flashing in the sun as they flew overhead, and then into one gigantic banking turn and then you would see a perfect black V against the sky as the sun hit them at a different angle – no longer snowy white but black and crisp against the blank sky.

I feel fortunate to live in one of the most beautiful places on earth, and I try to gulp this down each and every day. High overhead during this show I would see planes flying in and out of our local and national airports. Nearby, tankers and container ships travel along the Georgia Strait to our local container port. I’d like to think that we work hard to strike the right balance between development and nature. There are a lot of people who don’t want anything to change, and others who feel that more development is needed.

And while we need to work, to trade, in order to live, I never want to do it to the degree that we cannot enjoy what our bounteous earth has to offer. As such I commit myself to listen and appreciate the ‘crows’ in our little town who some time seem to caw a bit too loudly but speak for something we should all hold dear.

But as I looked at the ‘zigs and zags’ and ‘to’s and fro’s’ of nature’s great game yesterday, I thought about our company, Tailwind Transportation Software, and how our evolution and how our growth mimics the journey of these snow geese.

I saw groups heading in different directions, like two departments working on something at odds to each other. Some groups were flying in a perfect ‘V’ formation, but at different altitudes, not aligned but not colliding either, like one department that has developed more quickly than the other by design or by chance. Different birds heading in different directions – taking part of the flock with them, inevitable in most companies where you break people and groups down into specialized roles. At different times in our business we have seen leadership come on different fronts – someone showing a spurt of excellence that enthuses other, a breakthrough idea, or some results that amaze all – like those geese flying at the head of the V.

In our trucking software and freight brokerage software some days I feel we are like that big flock of snow geese. We are moving quickly, there is lots of energy, and we are working to make sure we are all aligned and heading in the right direction. And while some days I can’t quite figure out why some are flying high while others are flying low, some flying East and others flying West, at least I know that we don’t collide and that we are going to get to our destination.  It might not be as direct as a like, but we are getting there.  As President & CEO of this flock we call Tailwind, I am confident that we will get to our destination.