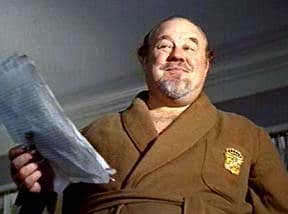 “We had to read the play and watch the movie in English class at high-school, dad. Some of the kids called it ‘Dog on a Stone Cold Floor’.”

Thump. Shut down. Tell it to the hand!

I was sitting on the couch watching a movie last night. I had mentioned to my daughter how much I was enjoying this classic movie on AMC. It had a 4 star rating and amazing actors.

She walked in smiled, looked at the TV and gave me the above ‘been there, done that… and didn’t really like it’ line, smiled again, and walked back out with an ear bud dangling down on her shoulder.

With a 37-year gap between us, I am now not just a father to one of the loveliest, most special daughters in the world, but after her first year in university I am now obviously ‘cultural fodder’. I guess that I am both her father – and her fodder.

I thought about switching off the TV and heading upstairs to play with one child who may appreciate me a bit more – perhaps my 12 year-old son. Or if that didn’t work, I could grab one of his four Fidget Spinners and take it out for a couple thousand spins. Or scare the cat no end by flipping a half empty plastic water bottle in the air just to see I could land it straight up. I ain’t no old fuddy-duddy kids – I can spin and flip with the best of you!

But I didn’t because I was enjoying the movie so much; watching the younger versions of Paul Newman playing the disconsolate, alcoholic athlete son, Brick, and the alarmingly beautiful Elizabeth Taylor playing Brick’s young and frustrated wife, Maggie – not quite believing that two characters that look like Newman and Taylor might ever have a problem with chemistry.

But I really enjoyed this great movie. It was based on Tennessee Williams iconic play about a Southern family facing the profound issues of life at the patriarch’s 65th birthday party, the pending mortality of the father, Big Daddy, played by Burl Ives, the succession plan for the 28,000 acre ranch that must be split amongst his two sons – sons who are dealing with the envy and covetousness of their partners. And most poignantly the complex relationship between father and son – and the relationship between the father and his long lost father.

‘The Child is the Father of the Man’

As I think about my father on the cusp of his 90th birthday, so do I have to come to terms with the new role emerging for me as a later middle-aged father with children growing and becoming more self-reliant. I am not sure they become independent anymore. The joke around my home town – with housing prices doubling over the past 5-years – sounds like this.

‘I’m saving up for my child’s university education so they can get a degree, graduate and come back to live at home’.

It’s a bit of a weird world these days. And fatherhood is taking a bit of a knock as fathers all over grapple with their role, trying to stay relevant as they get older in a fast changing world, trying not to come across as some benign wise old owl.

‘He’s such a nice man. He wears  nice sweaters. But he tells the same joke over and over again – and only he laughs at it!’

Today as I sit in my office at our trucking software company I am thinking about all the men and fathers that created this industry. Behind every truck is a driver (though maybe less in the future…) and behind every driver is usually a good wife, sister, mother who is helping him along. I want to make sure I mention that.

But to be sure, with 95% of the driver’s being men, it is important to realize that the trucking industry was built on the energy, the initiative and perseverance of a great number of men – many of whom are fathers. Men who sacrificed many hours away from home to drive trucks, gone for long periods of time, trying to ‘make a buck’ and feed their families for another month. They worked hard.

Some built great, vast empires. Others wanted it simpler, or more defined, and desired to drive for others, while others wanted to drive their own rig. But in each instance they were following their own personal GPS systems through life, trying to do the best that they could. Some guys wanted to stay closer to home, while others were made for the road, longing to see the world out there. But after a while they didn’t or couldn’t drive anymore, or, at the very least, wanted to drive a lot less. And they came home for good.

All of them left a legacy in some way, either taking the risk of building a business, or contributing to the success of a business, or perhaps just finding a way to another job or another load in order to keep the wolves at bay. These are the men that built the industry, built solid relationships in person, with a firm handshake and looking directly at the other in the eyes. They did business on that basis for 20-30 years. Their word was the bond.

And before the internet, before smart phones, and certainly before fidget spinners, they were there building this industry. And, especially on this weekend, we ought to listen to their stories because there is wisdom, there is courage, but most of all there is a lot of love and sacrifice, in their words. You see, when you are in a truck, it would have been easy to just keep driving further and further away. But most of them returned home to see their families – their wives, their kids.

This weekend we celebrate dads and fathers – so we should say thanks to all the ‘Big Daddy’s out there who paved the way for all of us. We should make sure to honor them with our attention and our presence as they stroll out to the garden with Big Momma to look upon their bounty, and reflect upon the acreage of their life.

And they were always much more the ‘Cat on a Hot Tin Roof’ than they were ever some ‘Dog on the Stone Cold Floor’!